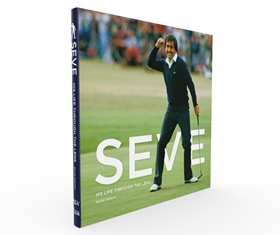 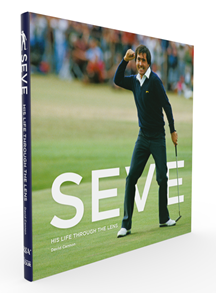 A beautiful tribute to Severiano Ballesteros

This R&A and European Tour supported book, launched on May 7th 2021 to coincide with the tenth anniversary of Seve's passing, is a stunning photographic celebration of his life.

Award-winning photographer, David Cannon (who was a friend of Seve and took the iconic picture on the cover of the book), has curated the best pictures from Seve's life and career.

The book opens with a moving ‘Thank You’ letter written by his eldest son Javier and on behalf of his brother, Miguel, and sister, Carmencita. The Ballesteros family have also generously supplied a number of previously unpublished ‘family portraits’ of them with their father.

Each chapter begins with an essay by renowned golf writer Robert Green, author of two books on Seve, and includes a ‘Moment in Time’ piece by David where he reveals some of the background stories behind some of his favourite images of Seve. The book concludes with Sir Nick Faldo describing how his great rival acquired legendary status in the game and Jose Maria Olazábal paying tribute to a ‘very special friend’.

Supported by the Seve Ballesteros Foundation - this book is a fitting tribute to one of Golf's most charismatic characters and will appeal to fans who remember Seve as one of the greatest players of all time.

As well as the standard edition of the book a very special Collectors’ Edition with a limited run of 1,000 copies has been produced. Each copy is presented in a bespoke leather-style clamshell box and includes a numbered signed print by David Cannon of his iconic photograph of Seve winning The Open at St Andrews in 1984.

More information about the Collectors' Edition can be found here